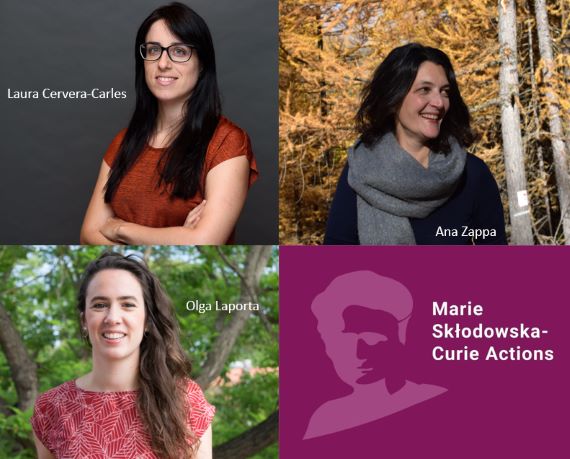 That’s the key message from the 3 success MSC fellows

Laura Cervera-Carles, Olga Laporta-Hoyos and Ana Zappa were awarded with the prestigious and highly competitive MSCA fellowship. Now they are ready to start their exciting research at the Institute of Neurosciences of the University of Barcelona (UBneuro).  When we asked them for advices, they all agree that a key factor is to count with the support of the supervisor and the host institution. They specially acknowledge the personalize mentoring that they got from their future colleagues.

Olga Laporta-Hoyos said “It was very helpful to receive mentoring from Carme Uribe and Georgina Guilera. Their experience with MSCA and expertise were key inputs to improve my proposal.” and her supervisor Roser Pueyo added “The success of this proposal lead by Olga Laporta-Hoyos is an example of the importance of teamwork. I would like to thank the support of UBneuro for its internal and external mentoring and the mediation of Cristina Pulido”.

Ana Zappa advised “start early and make sure to guarantee scheduled time for input from your supervisors and mentors early on, going as far as creating a calendar with deadlines per section, for example. Having sample proposals is great but there is no perfect proposal and yours will be its own. That said, I think using a few tables and figures in the place of text is always a good idea as it saves space and makes it easier for the reviewers (who have many, many proposals to read). Don’t forget to save a lot of time for the Impact section as this is the one most of us have the least experience writing and it’s very important. I was truly lucky to benefit from UBneuro’s mentoring program; my mentors gave me thorough, complementary feedback that could only come from someone who has gone through an MSCA application.”

Laura Cervera-Carles is extremely grateful to have been awarded a MSCA postdoctoral fellowship. She believes “It will be an excellent opportunity for me to acquire new skills and to study functional genomics in the context of neurodegenerative disorders. I would like to thank Dr. Eulalia Martí and her group for their unconditional support, as well as the UBneuro and the mentors Daniel del Toro and Daniel Tornero for their valuable help.”

Many pathogenic mechanisms are involved in Huntington’s disease (HD), the most prevalent monogenic neurological disease in Europe, with no current cure. Dr. Eulalia Martí reported a dysregulation of tRNA-fragments (tRFs) in HD brains; other studies showed higher stress granules’ (SG) density in HD, and that tRFs promote SG assembly. Thus, Cervera-Carles’ hypothesis is that HD-related tRFs contribute to the accumulation of SG, initiating mutant huntingtin (mtHTT) aggregation and leading to disease pathogenesis. She proposes to explore the interaction between mtHTT aggregates, and tRFs and SG, as new potential therapeutic targets.

Cerebral Palsy (CP) is the most common physical disability in childhood and Autism Spectrum Disorder (ASD) is one of its most common and impactful comorbidities. Proper identification of ASD in CP is clinically important but state-of-the-art diagnostic methods rely on behavioural symptoms that overlap with the motor and speech difficulties seen in CP. This makes ASD diagnosis very challenging and limits the validity and usability of standardized clinical instruments. Consequently, some children with CP go undiagnosed and without important support for their ASD. Others can be falsely diagnosed by, for example, being physically unable to complete assessments. This has detrimental effects and results in resource misallocation.

More and more Europeans acquire a second language (L2) during adulthood. However, people greatly differ in their learning success across different learning settings, such as phone apps or in-class. Due to its key role in acquiring our first language during childhood, social interaction might also play an important and underappreciated role in L2 learning. Nevertheless, understanding the role and underlying processes of social interaction in L2 learning has been hindered so far by an enormous technical hurdle: natural social settings have to be translated into the controlled lab environment. With this project, we aim to use a novel approach, combining social cognition, neurolinguistics and ecological valid virtual reality (VR) to tackle this hurdle for the first time. We will design VR environments in which we can control the type of social interaction and the social agent with whom the participant interacts. This will allow us to determine all relevant factors of social interaction that benefit L2 learning success in a natural, yet controlled setting. Furthermore, we will overcome the challenge of combining the VR experience with simultaneous brain measures in the form of electroencephalography (EEG), as well as psychophysical (pupilometry and eye movements) and behavioral measures. This will enable us to measure the effects of social interaction on different cognitive levels and with different temporal resolutions.

Do not hesitate to contact the Institute of Neurosciences if you wish to apply for any grant. We will love to help you. Last MSCA PF edition our success rate was 4 times higher than average.