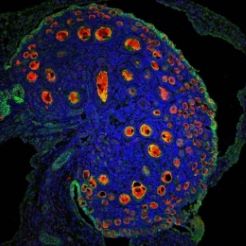 The deletion of the Wt1 gene during the early stages of the embryonic reproductive organ formation leads to differences in sex development in adult mice, according to an article published in the journal PLOS Genetics and led by the lecturer Ofelia Martínez-Estrada, from the Faculty of Biology and the Biomedicine Research Institute (IRBio) of the UB.

Among the participants in the article are the experts Francesc X. Soriano, from the Department of Cell Biology, Physiology and Immunology, and the Institute of Neurosciences of the UB (UBNeuro), and Manuel Reina, from the same Department and the Research Group Celltec UB.

A decisive gene in the biology of sex

The Wt1 gene or Wilms tumour gene is expressed during the embryonic development of mammals in many organs and tissues (urogenital system, spleen, heart, diaphragm, etc.). In scientific literature, the mutations of the Wt1 gene are related to some pathologies —syndromes such as Denys-Drash, Frasier and Meacham’s— which include genitourinary defects and differences in the sex development (such as ambiguous genitalia or abnormal development of the gonads).

These differences in the sexual development are congenital disorders in which the development of the chromosomal, gonadal or anatomic sex is atypical. Despite the efforts to understand the genetic factors that cause these alterations, the origin is unknown in many cases and it is hard to offer a precise diagnosis to the affected people.

Murine models with modifications in the expression of key genes in the sex development are shaped as decisive elements for studying this complex process in mammals. Therefore, in recent years, new genetic tools have been generated in mutant mice models to study different aspects of the biology of the WT1 gene.

As part of the study, the team presents a new genetically modified mouse model (Wt1KO) which revealed the importance of the Wt1 gene in the initial differentiation of the embryonic gonad at early stages and its impact in the formation of the reproductive system of adult mice. According to the conclusions, female and male Wt1KO mutant mice —unable to express the Wt1 gene in reproductive organs from the early formation stages– showed ambiguous genital tracts and their gonads remained at an undifferenced stage.

“In this study, we state that the Wt1 gene is necessary for activating the pathways that determine the development of the male and female sex, since embryonic mutant gonads do not express the specific genes for each genetic program”, notes lecturer Ofelia Martínez-Estrada, from the Department of Cell Biology, Physiology and Immunology of the UB.

To date, it has been hard to assess the functions of the WT1 transcription factor —coded by the mentioned gene– during the early differentiation of the gonad and its impact on adult sex development. The lack of development in gonads or in the genital tract (gonadal agenesis) and the embryonic lethality shown in Wt1KO mutant mice hindered the progress of research to elucidate the role of this gene in these development processes.

“Based on the obtained results, we propose that this murine model could contribute to improve the knowledge on the functions of the WT1 gene in some progenitor cell populations in different organs and tissues, as well as the importance of these cell populations in the formation of organs in adults”, concludes lecturer Ofelia Martínez-Extrada.