Researchers of the Institute of Neurosciences have studied the influence of immersive virtual reality (IVR) on racial bias. The study, published in the journal PLOS ONE, has used this technology to analyse the effects of immersion on a virtual person in automatic behaviours towards other races.

The results show that adopting a certain virtual race, regardless of the real one, has an effect on certain unconscious behaviours towards virtual people with the same color. According to the researchers, these results show the impact of these experiences in the perception, behaviour and attitudes but they also open the door to the uses of this technology to fight racist attitudes.

The study was led by Mel Slater, ICREA researcher from the Event Lab of the University of Barcelona. The study also counts with the participation of the expert of the UB Bernhard Spanlang and Béatrice S. Hasler, from the Sammy Ofer School of Communications in Israel.

During social interactions, people identify as members of social groups to which they belong spontaneously. This identification, in which features such as race or sex are strong elements to establish relations of belonging to a group, has an influence on interpersonal perceptions and behaviours. A common method to counteract this bias is the perspective-taking, which usually requires people to imagine what it would be like to have another skin color or sex. In the new study, researchers have changed this perspective using IVR: “Instead of making them imagining they are another person, we put the participants in the situation of actually “being” another person”, says Mel Slater, also researcher of the Institute of Neurosciences of the UB. 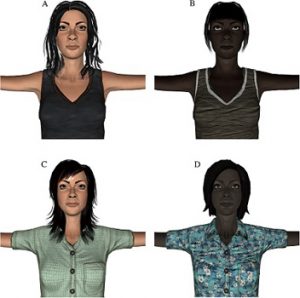 The study was conducted with 32 white women that were randomly assigned to a white or black virtual body. With virtual reality glasses and clothes, the participants embodied the given avatar and had to interact with another virtual woman which was created by the program. In the experiment, the participants had to describe a set of pictures that appeared on a virtual wall, and then listened to the description by the other virtual woman. Each participant repeated the experiment twice, in different weeks, but always with the same skin color that was first assigned. However, the skin color of the avatar with which they shared the virtual space was different in every test.

Mimics as a harmony indicator 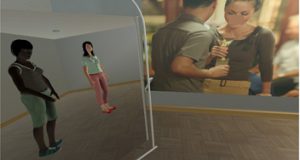 For example, when the volunteer met a black avatar, she imitated her more than when meeting a white one”, says Slater.

“This imitation –continues the researcher- is important, since it is an unconscious behaviour which, according to studies of social psychology, indicates a social understanding. That is, we unconsciously tend to imitate more those with whom we are in harmony”.

Changes outside the virtual experience

The researchers highlight that it is not possible to compare these results outside the virtual simulation, since in order to do so it would be necessary to monitor the participants so as to certify the variation of racial bias in their daily lives. In this sense, a previous study by EventLab has shown that embodying a virtual person of a different race “reduces racial bias at least a week after the exposure to virtual reality”.

According to researchers, this impact on implicit behaviours of the participants makes IVR a future promising tool to fight racism in everyday life. “When its use gets generalized among society, I can imagine non-violent games and interactive films with IVR in which the player embodies different roles and bodies” says Slater.

“Other possible applications would be the use of IVR so that public officials, such as policemen, who work directly with people, experience what it would be like to be treated differently depending on their race (virtual). This would be certainly more important in some countries with severe racial problems than others where this is not a serious problem” concludes the researcher.